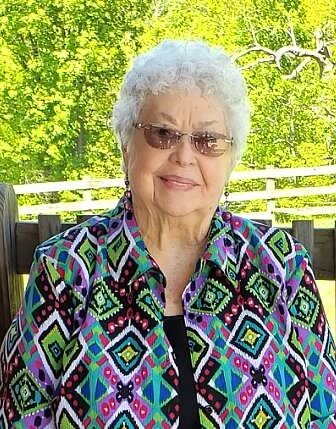 Please share a memory of Pat to include in a keepsake book for family and friends.
View Tribute Book

Pat taught in the Doniphan R-I School system. She enthusiastically shared her love of learning, especially when it was focused on literature and writing compositions. She was a favorite teacher to many of her students. Pat loved her students and was always trying to help them. She and her husband were avid supporters of the Doniphan sports teams. After retiring from teaching, she joined her husband in the family business, Griffin Insurance. They had also housed the license bureau for several years.  Pat was extremely active in community events and was a founding member of DNAP, a former Doniphan R-1 school board member, former member of the Industrial Development Association, a member of the Business and Professional Women’s Club, BPW woman of the year in 1975, VFW woman of the Year in 1990, and Ripley County Chamber of Commerce Citizen of the Year in 1982.  Pat was very active in the Democrat party and was former President of the 10th Congressional District.  Pat was also very active in Doniphan United Methodist Church activities, particularly anything involving music.  Her family was very important to her, and she enjoyed spending time with her family, especially her grandchildren.

Pat was preceded in death by her parents, stepmother, Lucile Vaught; in-laws, Sam and Verneal Griffin; brothers, Joe and Tim Martin; and brother and sisters-in-law, Cliff Griffin and Judy Griffin and Ann Holder.

On January 26, 1963, in Doniphan, MO, she was married to Bob Griffin, who survives.  Also surviving are children, Sam and Regina Griffin of Doniphan and Matt and Angie Griffin of Poplar Bluff; sister, Karen “Katy” Doran of Pennsylvania;

Funeral Services for Mrs. Griffin will be held Wednesday, March 2, 2022 at 10:00 a.m. in the Edwards Funeral Home Chapel with Rev. Kent Wilfong officiating.  Visitation will be Tuesday evening March 1 from 5-8 PM.  Burial will be in the Doniphan Cemetery.

Memorials may be made to the Doniiphan United Methodist Church.

A Memorial Tree was planted for Pat
We are deeply sorry for your loss ~ the staff at Edwards Funeral Home, Inc.
Join in honoring their life - plant a memorial tree
Print
Online Memory & Photo Sharing Event
Online Event
About this Event