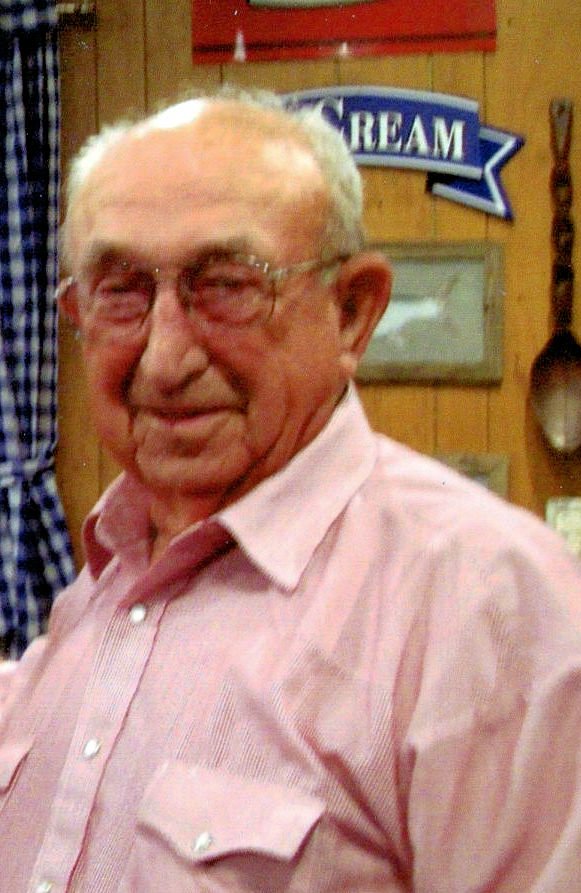 Chester Ordell Gibson, 92, of Doniphan, MO, passed away Wednesday, August 4, 2021 at Poplar Bluff Regional Medical Center. Ordell was born December 4, 1928 in Middle Brook, Arkansas to the late C.O. and Zelma Gibson. He graduated high school in 1949 from Doniphan High School. He met and married his wife of 68 years, Doris Self Gibson, on September 27, 1952. Together they raised two daughters Joan and Virginia. Ordell was devoted to his family, church, farm, and community. He was a charter member of Emmanuel Baptist Church, where he was the church Treasurer for 20 years, and served as usher, Deacon, and church bus driver. He was also a farmer who raised Hereford and Charlois cattle as well as Duroc hogs. Special companions on the farm were his horses Trixie, Lady and Copper, his bird dog Butch, and English Shepherd dogs Skipper and Duke. Ordell retired from Doniphan R-1 School district as the Director of Transportation after 25 years. He received certificates from the Missouri Department of Elementary and Secondary Education Certified School Bus Drivers Training and the Missouri Department of Revenue Third Party School Bus Examiner. He could also be seen driving a road grader, gas truck, and cement truck. Ordell worked on the Agriculture Board, served as a clerk at voting precincts, was on the Senior Citizens Board, and volunteered for the Friends of the Library. He loved spending time with his family and friends, fishing, boating, travelling, participating in barrel racing and flag racing at the local arena and quail hunting. He was a carpenter and built the house that he and his family lived in as well as helped his father build barns. His hobby was woodworking, and he had made many flowers, push pulls, and boat paddles for family and friends. Ordell, was a veteran of the U.S. Army and served in Korea during the Korean War, from November, 1950 until August, 1952. He was honorably discharged as a Sgt. 1st Class. He received a Korean War Medal and Korean War Service Medal, other accomplishments can be viewed at the Current River Museum. He was a member of the VFW and the DAV. Ordell was active in Masons and Eastern Star. He was a past Worshipful Master of the Masonic Composite Lodge A.M.F.M. #369 and a past Warder of the Order of Eastern Star #288. Survivors include his wife, Doris Self Gibson; two daughters, Joan (Bruce) Lowery of Doniphan and Virginia (Richard) Campbell of Hernando, MS; one sister, Hester Ann (Waif) Griffin of Doniphan; seventeen grandchildren Bob, Cammi (Greg) Pierce, Natalie, Cody, Lisa, Daryl, Octavia, Keisha (Don) Robinson, Davy, Wade, Shawn, Rashawn and Jordan Lowery, Ryan (Ashley) Crihfield, Evan (Hannah) Campbell, Layci (Michael) Darby, and Payton Campbell; sixteen great-grandchildren, and many nieces, nephews, cousins and friends. Siblings who went before him were Verdalene and Denist Ordway Gibson. Ordell’s grandsons are honored to serve as pallbearers and nephew as honorary pallbearer. Visitation will be held Friday, August 13, 2021 from 5:00 – 7:00 P.M. with a Masonic Service to follow from 7:00 – 8:00 P.M. at Edward’s Funeral Home. Funeral services will be August 14, 2021 at 10:00 A.M. at Emmanuel Baptist Church with Luther Abbott and Justin Francis officiating. Burial will follow at the Doniphan Cemetery with military honors. Services are under the direction of Edwards Funeral home and flowers by Plaza Flowers. A meal will be provided for family and friends by Emmanuel Baptist Church. Any donations can be made to the Missouri Baptist Children’s Home or Gideon’s in Ordell’s honor.

A Memorial Tree was planted for Ordell
We are deeply sorry for your loss ~ the staff at Edwards Funeral Home, Inc.
Join in honoring their life - plant a memorial tree
Print
Share A Memory
Plant a Tree