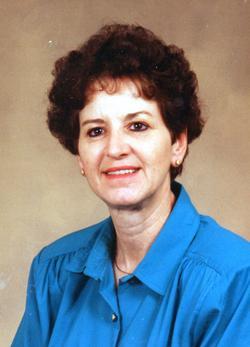 Please share a memory of Sandy to include in a keepsake book for family and friends.
View Tribute Book
Sandy Kettwig of Doniphan, Missouri, departed this life June 16, 2014, at St. Francis Medical Center in Cape Girardeau, Missouri. She was born December 19, 1947, in Cobden, Illinois, to the late Ed Sweitzer and Georgia (Allen) Sweitzer. Sandy was employed as a custodian at the Doniphan R-1 School District and attended the Emmanuel Baptist Church. She enjoyed a clean home, arts and crafts and especially her dogs. She was married to Joe Kettwig on May 29, 1965, and he survives. Also surviving are two sons: Terry (Ryan) Kettwig of Georgia and Joe Kettwig of Doniphan; six grandchildren, Kyle, Preston and Connor of Doniphan and Hunter, Sydney and Dru of Georgia; one great-grandchild, Kayden of Doniphan; three sisters, Phyllis (Jim) Brasser of Doniphan and Linda Goddard and Debra (Les) Gabel, both of Indiana; one brother, Dan (Genna) Holt of Doniphan; one step-brother, Tom Hunter of Arkansas; and two step-sisters, Jeannie Mitchel of Michigan and Mary Thrift of Doniphan. She was also preceded in death by two step-fathers, Woodson Hunter of Doniphan and Bob Holt of Indiana; and three step-brothers, Cliff Holt, Vic Holt and Dwayne Hunter. Visitation will be held Wednesday evening, June 18, 2014, from 5 - 8 p.m. in the Edwards Funeral Home in Doniphan. The funeral service will take place Thursday morning, June 19, 2014, at 10:00 a.m. in the funeral home chapel. Burial will follow in the Pope Chapel Cemetery near Doniphan.

A Memorial Tree was planted for Sandy
We are deeply sorry for your loss ~ the staff at Edwards Funeral Home, Inc.
Join in honoring their life - plant a memorial tree
Online Memory & Photo Sharing Event
Online Event
About this Event

Share Your Memory of
Sandy
Upload Your Memory View All Memories
Be the first to upload a memory!
Share A Memory
Plant a Tree