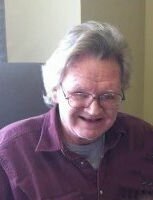 Please share a memory of Pete to include in a keepsake book for family and friends.
View Tribute Book

Pete had been a lineman with Libla Communications. He was in the United States Army serving three tours in Vietnam and receiving several medals.

On September 29, 1992, Pete married Linda Faye (Sisco) Garren. She preceded him in death on April 3, 2017. He was also preceded in death by a sister, Barbara Mikkelson.

Graveside services will be held at 3:30 p.m. on Saturday, February 12, 2022 at Union Cemetery in Ponder with his grandson-in-law, Tom Wiggs, officiating. Pete’s six grandsons-in-law will serve as pallbearers. Honorary pallbearers will be Jonathan Hipps, his grandson, and Barry Jackson, his great-grandson.

A Memorial Tree was planted for Pete
We are deeply sorry for your loss ~ the staff at Edwards Funeral Home, Inc.
Join in honoring their life - plant a memorial tree
Print
Online Memory & Photo Sharing Event
Online Event
About this Event