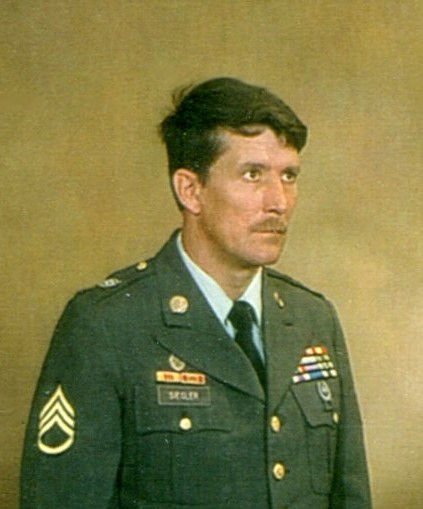 David Ray Siegler, 73-year-old resident of Doniphan, MO, departed this life Saturday, July 31, 2021. He was born September 15, 1947 in Cooter, MO to the late Jacob and Inez (Manes) Siegler. David served in the United States Army, from which he later retired. He served during the Vietnam War, Panama, and Dessert Storm, and was awarded the Vietnam Service Medal with Bronze Service Star, National Defense Service Medal, and Vietnam Campaign Medal, among other rewards and recognition. He then served in the Army National Guard. David’s time in the military gave him the opportunity for many varied experiences, stories, and memories that he loved to share. David was a friendly person and considered no one a stranger after meeting them. He quickly became a good friend. David enjoyed fishing and hunting and was the former owner of Current River One Stop and Matrix (Arkie Lures). He cherished his family and friends and time spent with them. On June 5, 1988, David married Beverly Portwood in Marston, MO. She survives. Also surviving are his children, David Bishop of Benton, AR, Timmy Siegler of Dallas, TX, and Dennis (Tracy) Jones of Doniphan; his sister, Betty (Dallas) McKee of Lexington, TN; grandchildren, Eric Siegler, Sydnee (Taylor) Holland, Kyle Jones and fiancé, Caitlin, Dylan Bradsher, and Myah Jones; and one great-grandchild, Owen Holland. In addition to his parents, David was preceded in death by three sisters, Sara Holt, Mae Siegler, and Judy Pinkston; brothers, Jessie, Gerald, Bobby, and Harold Siegler; and a grandchild, MacKenzie Jones. Visitation will be at Edwards Funeral Home on Wednesday, August 4, 2021 beginning at 10:00 a.m. with the funeral service to follow at noon. Brother in Arms Travis Smith will be officiating. Burial will be in Hunt-White Memorial Gardens with full military honors.

A Memorial Tree was planted for David
We are deeply sorry for your loss ~ the staff at Edwards Funeral Home, Inc.
Join in honoring their life - plant a memorial tree
Print
Share A Memory
Plant a Tree