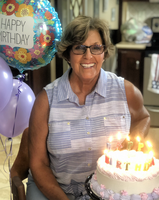 Donna F. Carpenter-Resnik, 69, of Poplar Bluff, MO passed away peacefully surrounded by family on Monday, April 27, 2020, in Dexter, MO. Donna was born on June 25, 1950, in Bonne Terre, Missouri to Richard and Claradine (Hays) Hill. She is survived by four sisters, Diane Gray, Judy Green, Janet Denison and Jeanie Currington and one brother, Joe Hill. One sister-in law, Beth Summers, and one brother-in law, Dan Resnik. On December 25, 2015, she married David Resnik. He preceded her in death. She leaves behind three children and spouses; Krista & Steve Sells of Poplar Bluff, Missouri, Ryan & Michelle Spakes and Kyla & Randy Smith, all of Lexa, Arkansas; nine grandchildren and their spouses, Courtnee & Jason Jordan, Cory & Taylor Jackson, Allison & Rus Miller, Riley & Matt Crews, Anthony & Chloe Smith, Kasey Smith, Justin & Morgan Spakes, Nathan Spakes, and Dawson Spakes; eight great-grandchildren, Roman, Andie, & Piper Jordan, Huxley & Beckham Jackson, Cameron Crews, and Natalee & Berklee Spakes. She was a jack of all trades. From aerobics instructor, lab technician, hardware store owner, to a clerk at Three Rivers College, all of her careers were focused on helping others. She was a regular attender of West Side Church of God, where she always greeted everyone with a smile and a hug. She enjoyed working in her flower gardens and being outside, whether that was taking a walk with Sadie or taking in God’s beautiful scenery at her home in the country. More than anything, her most treasured time was when she was spending time with her family. Her sister visits were so special to her. Donna was a sister, mother, aunt, & friend. But of all her titles, Grandma Donna (GaGa) was her most cherished. Her greatest joy came from watching her babies grow! She loved us all well. We are thankful for the extra time we had to spend loving on her the last few months. As we watched lots of changes occur, it brought some tough times. But now those memories bring laughs as we think back on the bags of popcorn, ice cream out of the carton, and as many donuts as we would allow her to eat. She leaves a (donut) hole, in our hearts. A celebration of life will be held on Thursday, June 25, 2020, at 10:00 a.m. at West Side Church of God. We would love to celebrate her big, how she deserves to be celebrated. Please makes plans to attend. In lieu of flowers, please make donations to: West Side Church of God-God’s Money Building Campaign. 2807 Channon Dr. Poplar Bluff, MO 63901 or The Alzheimer’s Association. 225 N. Michigan Ave., Fl. 17 Chicago, IL 60601