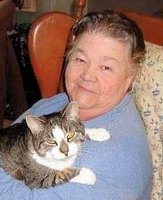 Mrs. Chimene worked many years at Wardrobe Cleaners in Collinsville, OK. She loved her puppies, Buddy and Dixie. She also enjoyed gardening, playing BINGO, and sitting on her front porch swing singing gospel songs. Beverly was of the Baptist faith.

In addition to her husband, Mrs. Chimene was preceded in death by her sisters: Vera Barrett, Dorothy Smith, and Oleta Wilson; and brothers: William, James Ernest, and Donald Hensley.

Visitation for Beverly will be Tuesday June 4, 2019 at noon with the funeral to follow at 2 p.m. in the Edwards Funeral Home Chapel.  Burial will be in the Shirley Cemetery.